This blog details some of the key findings from the latest Gallup and Cookpad report on global cooking trends through 2019, A Global Analysis of Cooking Around the World, Year 2, released on Dec. 17.

Before the global pandemic and accompanying lockdowns likely drove people back into their own kitchens, results from the latest Gallup and Cookpad study of home cooking trends show this was already happening more often in some parts of the world. When countries experience social unrest related to political and economic strife, it can lead to an increase in people staying home to cook and eat meals, rather than dining out or consuming pre-prepared foods. 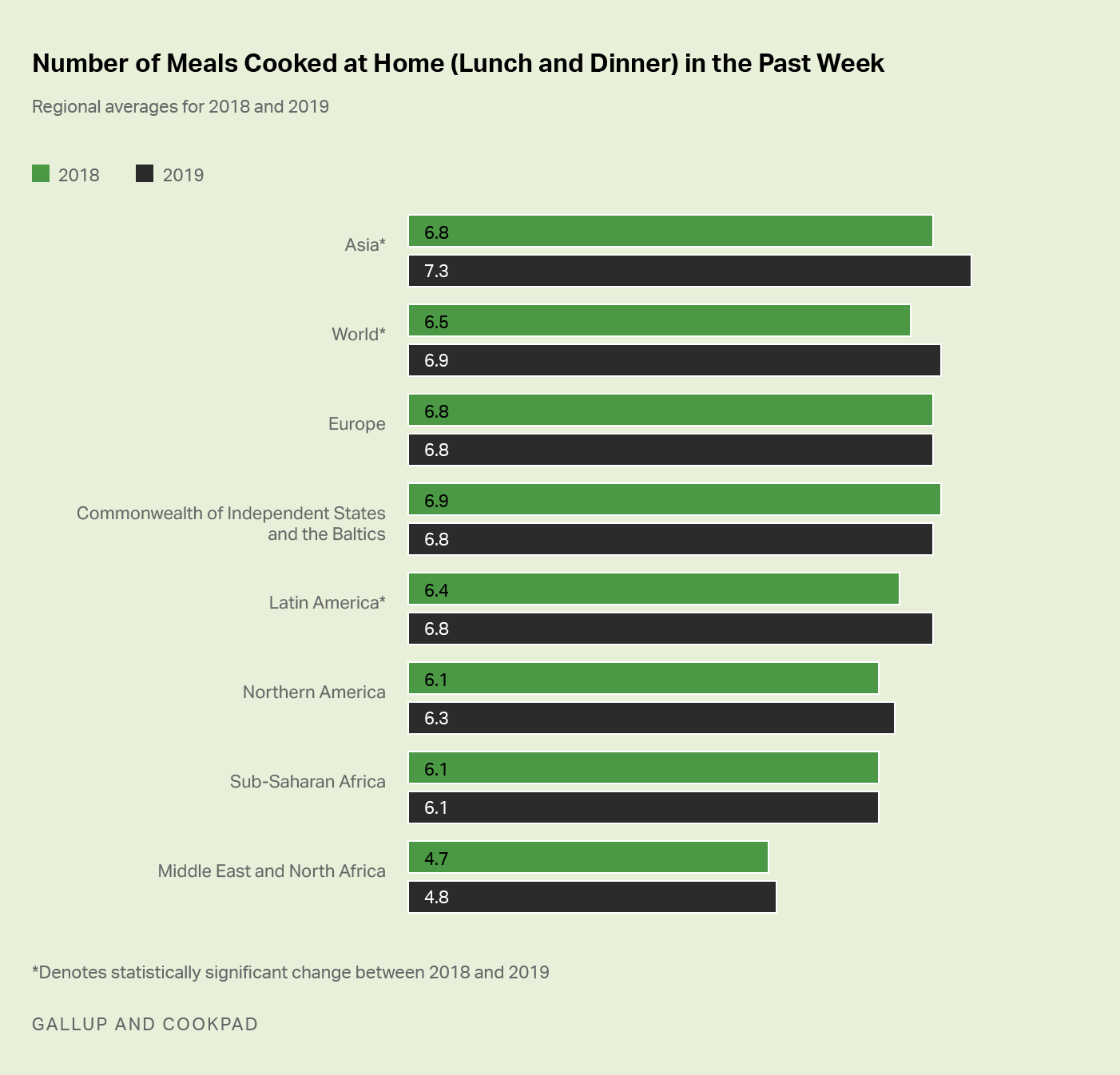 The results from this study are important — particularly in the context of the current global pandemic — because how much time people spend cooking, what resources they have and use to do so, and with whom they share a meal are all windows into people’s lives. Cooking is also a reflection of the health, consumer spending and carbon footprint of a country’s citizens. This, in turn, has consequences for the world’s economy and affects global food supply chains.

Cooking Habits Changed in 13 Countries by at Least 15%

While cooking habits were stable across most countries between 2018 and 2019, in 13 countries, the average number of meals people were cooking increased or decreased by at least 15%. In countries such as Lebanon, Mauritius, Ivory Coast, India and Pakistan, the typical number of meals prepared in the previous week increased in 2019. Meanwhile, in places such as Montenegro, North Macedonia, Bosnia and Herzegovina, and Georgia, people reported cooking fewer meals.

Many of the countries where cooking habits changed substantially in 2019 also experienced a series of economic or social shocks, which may have prompted changes in people’s lives, including their cooking habits.

In Lebanon, for example, the number of meals cooked at home per week rose from 2.8 meals in 2018 to 3.9 meals in 2019. The surveys in Lebanon took place amid tremendous political and economic turmoil, as reflected in people’s responses about their living standards. The percentage of Lebanese who said they were satisfied with their standard of living in 2019 was nearly 30 percentage points lower than it was the previous year. It’s highly likely that many Lebanese could not afford to eat out.

The effect on the service industry in Lebanon was devastating. According to an Al Jazeera article cited in the report, “Some 25,000 employees lost their jobs in the [four]-month period between October [2019] and January [2020] … in [the restaurant] sector that used to employ 150,000 people.”

The largest group worldwide falls into the first group; 40% of people frequently eat and prepare home-cooked dinners. People in this group are predominantly female (72% female vs. 28% male). Worldwide, women are over twice as likely to be in this group than men, with 57% of all women being people who frequently cook and eat at home, compared with 22% of men.

This large gap is consistent across all regions of the world except Northern America, where women are only slightly more likely to be in the group that frequently cooks and eats dinner at home — with 34% of women in this region falling in this group, compared with 23% of men. 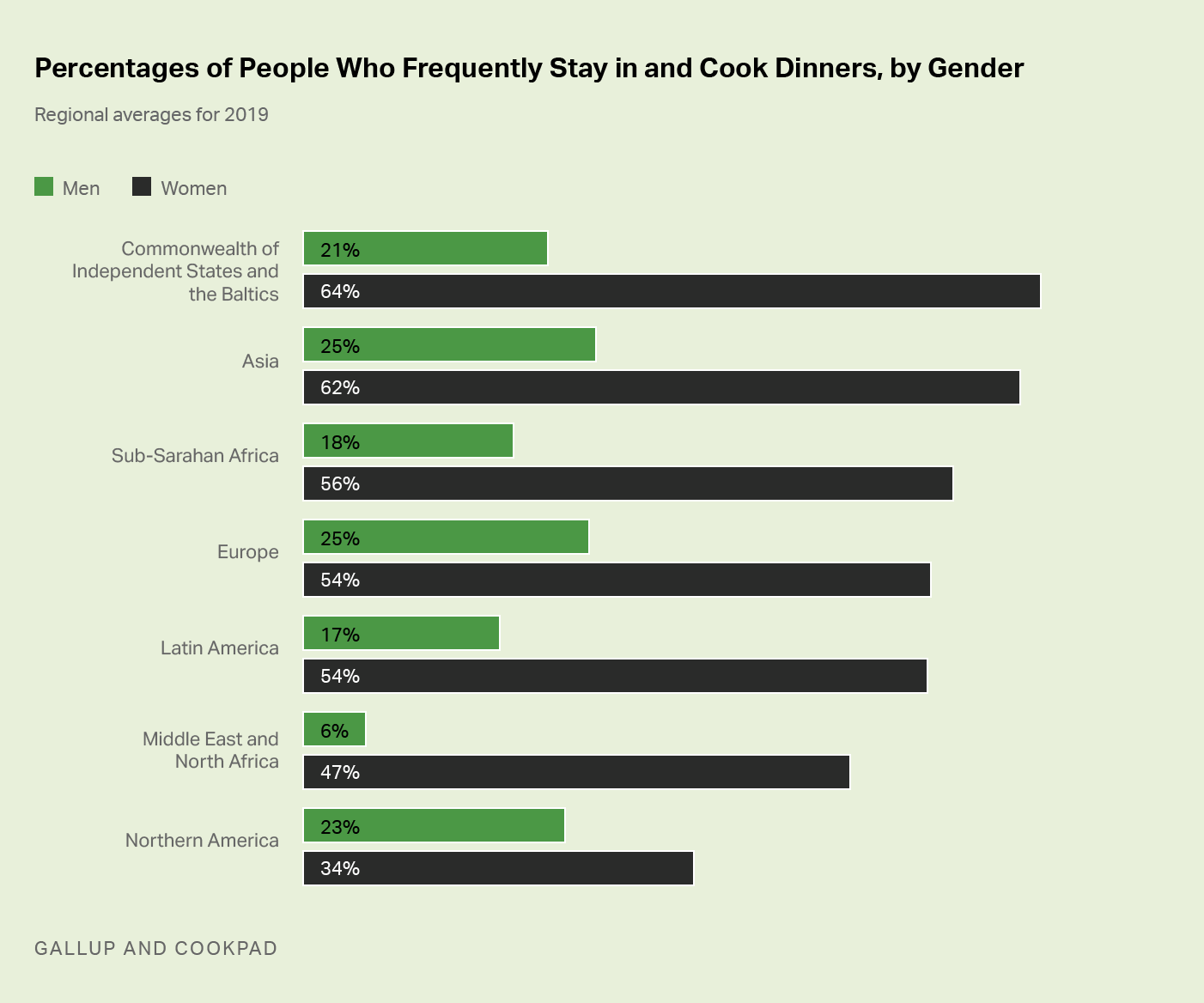 Conversely, those in the second group — who frequently eat home-cooked dinners but rarely prepare them — are predominantly male (75% male vs. 25% female). This male-dominated group is particularly prevalent in societies where there are relatively large gaps between men and women in key areas of human development as defined by the International Development Association gender equality rating and the UNDP Gender Inequality Index.

More analysis is needed of the people who either don’t prepare or eat home-cooked meals very frequently or do so only rarely (the third and fourth groups). They may be doing so not necessarily out of personal preference, but possibly because of food scarcity at the national level and self-reported challenges in affording food in the past year. Both issues have only been magnified during the global pandemic.

The results from the latest Gallup and Cookpad study add to the growing body of what the world knows about the role that cooking plays in people’s lives. Gallup collected and is analyzing data from more than 100 countries in 2020, and we expect to learn even more this year, when we anticipate significant changes in home cooking trends.

The economic effects of the pandemic have already been proven to hit vulnerable populations the hardest. This means that many of the countries already highlighted in the first two Gallup and Cookpad reports as having significant cooking increases or decreases will no doubt also be among the most affected by food scarcity during the pandemic.

To learn more about the global cooking analysis from Cookpad, visit their website.