There’s really nothing better than a chopped salad. Especially when someone is doing all the chopping for you. So if you’re in a giving mood, and want to make this Mango Cucumber Chopped Salad for your friends and family, you’ll truly be a hero!

9 times out of 10, if there’s a chopped salad on a menu while I’m dining out, I’m ordering it. All those knife skills have to be admired and as someone who cooks for a living, I’m always appreciative of someone else doing all that work. But… seeing as how we don’t dine out every single day, and sometimes you’re just craving a chop chop at home, this one needs to be on your agenda.

This Mango Cucumber Chop Salad is loaded with chopped spinach, cabbage, mango, cucumbers, bell peppers and tons of herbs. It’s topped with a peanut, lime and soy dressing that you’ll want to keep on hand for many other uses. It’s the brain child of my new friend Yvette who joined us while cruising the Galapagos. And she eloquently explained why chopped salads are better than all other salad and why chopping spinach is a necessity. I was hesitant but obviously I was curious. Fast forward 5 weeks later… I’ve been making it non-stop since returning home. Side note: I gave it to Poppy last night (as is, no modifications) and she hosed it. I was a little hesitant about the chopped raw veggies, but she was obsessed. I mixed in a 1/4 cup of cooked rice and it’s the perfect meal for a toddler. 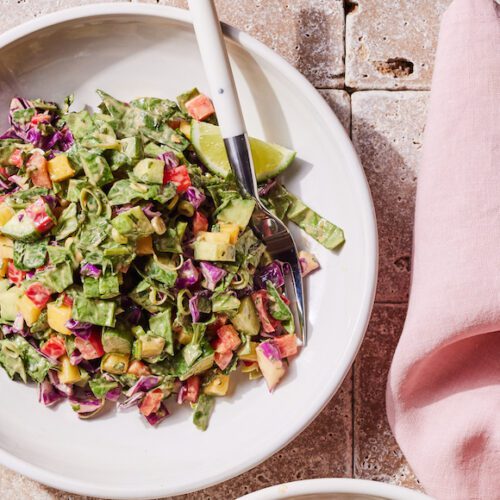 This Mango Cucumber Chopped Salad (which I usually refer to as a chop chop salad for Poppy) takes about 10 minutes of prep as far as knife skills go and then it’s then it’s time to eat. You’ll be obsessed with the flavor combos here.